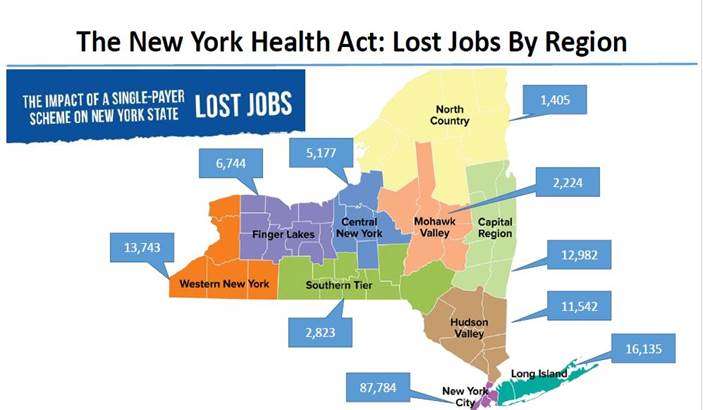 A new analysis released by the Realities of Single Payer estimates that the New York Health Act would eliminate more than 160,000 jobs, which would drastically reduce employment in local communities throughout New York State. The economic fallout of adopting a Single Payer, government-run health care system would have the greatest impact in Western and Central New York, the Capital Region and portions of the Hudson Valley.

“The job losses that the New York Health Act would cause would be beyond anything we’ve ever seen, including the Great Recession of 2008,” said Heather Briccetti, President and CEO of the Business Council of New York State. “With New York’s unemployment rate the second highest in the country, the cost that a government-run system would place on our economy is too great a price for New York to pay.”

“The estimated job losses and resulting reductions in reimbursement rates to providers will be devastating to the delivery system,” said Wendy Darwell, President and CEO of the Suburban Hospital Alliance of New York State. “Rather than upending both our economy and health care system, we should be focused on addressing the 5% of the population that is uninsured.”

The report estimates that the elimination of private health insurance is expected to result in a loss of 58,092 jobs in the finance and insurance sectors, including 32,022 jobs in the insurance industry.  An additional 71,601 jobs in other industries would be eliminated for a total of 161,715 lost jobs due to the New York Health Act. Most of the jobs that would be eliminated have largely been unaffected by the ongoing coronavirus pandemic. As the state’s unemployment rate has remained above 8% since October 2020, losing those jobs would push that rate even higher.

“The economic impact of the New York Health Act on this part of the state cannot be overstated – it would be devastating to the Capital Region,” said Mark Eagan, President and CEO of the Capital Region Chamber. “With businesses struggling to keep their doors open, this will compound the pandemic’s economic damage and make it more difficult to get people back to work.”

“Employers and business owners have faced extraordinary challenges as a result of the COVID-19 pandemic,” said Dottie Gallagher, President and CEO of the Buffalo Niagara Partnership. “The loss of jobs in Western New York due to the New York Health Act would be a significant blow to our region and exacerbate the efforts to rebuild our economy.”

“The finance and insurance sector has been a key source of economic resilience and stability during the economic crisis caused by the coronavirus,” said Professor Lewis S. Davis, Chair of the Economics Department at Union College and lead author on the report. “As our analysis shows, the cost of the New York Health Act is significant and wide-ranging and its impact would worsen the fiscal damage the pandemic has had on the economy.”

Economists from Union College and the World Bank prepared the report utilizing pre-COVID economic data. The analysis builds on the 2018 RAND report of the New York Health Act for the New York State Health Foundation, examining the proposal’s economic impacts, which the RAND report acknowledged it did not take into consideration. In addition to the estimates of job losses, the report discusses the bill’s impact on entrepreneurship and innovation, the potential for individuals to migrate from other states seeking care, and potential tax flight by high-income individuals due to the imposition of highly progressive income taxes. The report’s estimates of tax consequences do not reflect the potential compounding impact of the recent budget actions that increased the state’s personal income tax levels.

It would be reckless to pass the NYHA at any point, but especially now

For Immediate Release June 7, 2021 Open Letter to the New York State Legislature There…

Hospitals want the state to build on its record of expanding health coverage, not tear it down with a Single Payer system