Under Single Payer, all New Yorkers would be forced to get their health care coverage from one government system run by unaccountable Albany bureaucrats.

Like the insurance you have now? The majority of people do. But under the New York Health Act, private and employer-sponsored health insurance would be banned. It would be a one-size-fits-all approach to care.

More than half of all New Yorkers receive coverage through their employer. These people would lose their coverage under a government-run system, taking away the ability of employers to effectively manage their health care costs while still be subjected to massive tax increases.

Since many large businesses and government employers collectively bargain their health benefits with organized labor, these union members would lose their right to negotiate benefits with large employers and state and local government.

The New York Health Act would eliminate Medicare as it exists today for seniors by lumping them into a larger health care program. People currently covered by Medicare would lose their Medicare coverage. 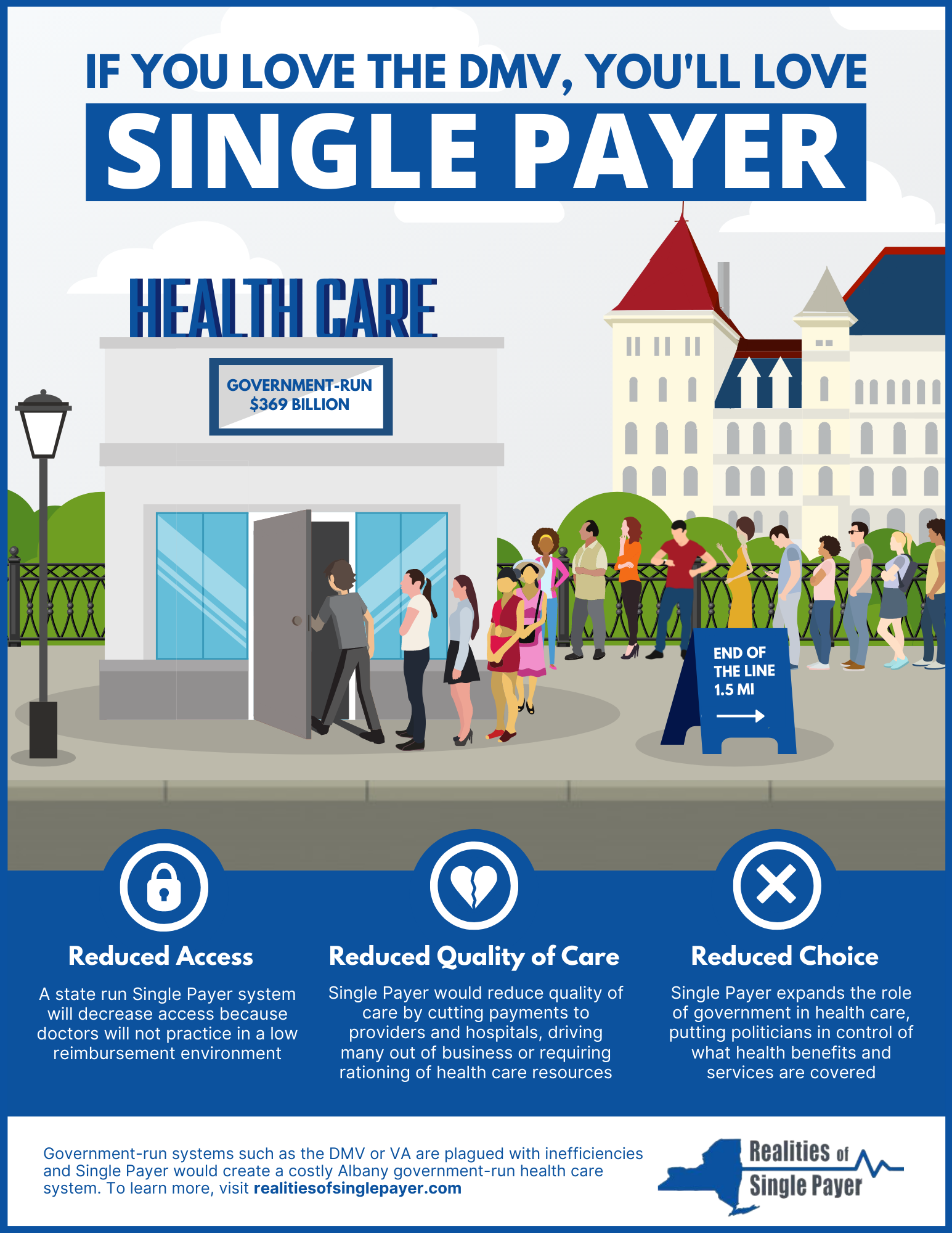 It’s not uncommon for Canadians to seek treatment in another country after learning that timely access to the required care is not available. Canadians spent $690 million on health care in other countries in 2017. 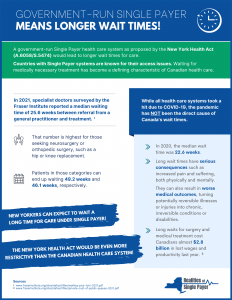 The New York Health Act prohibits network restrictions meaning you can go to any approved health care provider who agrees to accept the rate the NYHA pays.

However, it is important to note that the RAND Corporation estimates significant spending reductions in provider payments in order to control the cost of the NYHA. So some doctors may not want to take the pay cut and instead decide to leave New York.

Under the NYHA, lawmakers will determine how much to pay hospitals and doctors. One in 5 hospitals statewide would see funding fall by more than 25 percent. Your doctor may decide the lower pay and higher taxes aren’t worth practicing in New York anymore. This will also make it harder to recruit new doctors.

Other states have attempted single payer and failed

No states have adopted a Single Payer system.

While proponents argue that a Single Payer system will allow everyone to get care from any health care provider without utilization controls, the reality is that other countries with government-run health care systems impose restrictive requirements that limit choice and access to care. Read more:

Many of these "progressive" groups have pushed policies that have DRIVEN UP the cost of living in NY and DRIVEN OUT overburdened taxpayers. To truly move NY forward, our leaders in Albany should embrace pro-growth policies that will rebuild our economy.
👉 https://upstateunited.com/news/upstate-united-releases-2022-advocacy-agenda/ https://twitter.com/NickReisman/status/1481972001451515907