Despite the claims of proponents, a Single Payer health care system is not only impractical, it would be a financial disaster for both New York State and many New York families. Proponents of the legislation rely on a faulty, outdated fiscal analysis to claim that it would save money and provide better access to quality care.

The RAND Corporation issued an analysis for the New York State Health Foundation of the New York Health Act, titled “Estimating the Effects of a Single-Payer Proposal in New York State.” While the analysis suggested that such a system could be feasible, it would require $139 Billion in NEW state taxes in 2022, rising to $210 Billion in 2031 — representing the largest state tax hike in the history of the United States.  (New York currently collects $76 Billion in total taxes.) 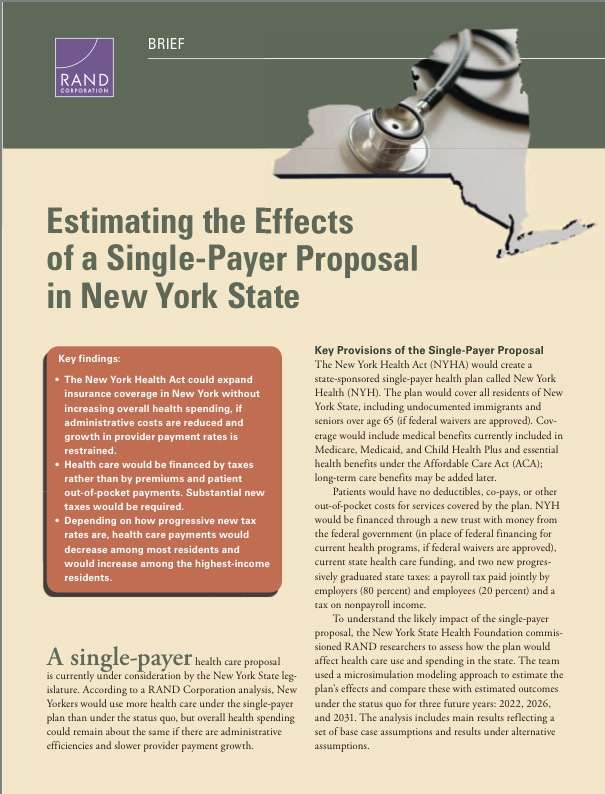 However, many of RAND’s assumptions, if not unrealistic, and the analysis fails to address a number of unique features of New York’s health care delivery and financing system. If those assumptions are unattainable and if New York factors are more accurately reflected, the impact will likely be far more significant, exceeding even the already exorbitant projected tax burden.

The analysis assumed that significant reductions in payments to doctors and hospitals would be necessary to achieve the projected savings and the state would be able to obtain the necessary waivers from the federal government,—assumptions that the report called “highly uncertain.” A closer look at these assumptions underscores the concerns about a Single Payer system.

Massive Tax Increases: The proposal would require a tax increase of $139 billion in the first year alone, a 156% increase in what the state currently collects in taxes, and up to $210 billion by 2031. Add long-term care, and that number climbs to more than $250 billion. These tax increases would be on top of the $82 billion New York already spends on health care. There’s no guarantee New Yorkers — individuals and businesses — would accept the extreme tax increases. Authors of the study noted the potential for tax avoidance, including changes in investment decisions or wealthier people or employers moving out of the state, saying even a small number of people or businesses leaving the state could cause the tax base to collapse.

Cuts to Provider Payments: The savings from a government-run system would come from reducing the reimbursement rates the state pays doctors, hospitals, drug makers and other providers. Hospitals have already voiced concerns about suppression of reimbursement for providers by state programs. Further, the RAND study noted that as a result of lower provider payments, doctors may relocate from the state.

Uncertain Federal Approvals: The state would need to receive waivers from the federal government for both New York’s current Medicaid program and to include Medicare beneficiaries in the new system. The Centers for Medicaid and Medicare Services has already signaled it will not grant such waivers for state-based government-run health care proposals.

The RAND report stressed that none of these assumptions are guaranteed. Even if they were realized, the impact of moving from our current health care system to government-run health care would be monumental.

Realities of Single Payer@SinglePayFacts·
23 May

Realities of Single Payer@SinglePayFacts·
19 May